Please enter the name and email details so that we can send your friend a link to the online tribute. No names or addresses will be collected by using this service.

To share your memory on the wall of Dr. John David Laida, sign in using one of the following options:

Your condolence has been submitted for approval. There may be a delay before posting.

Provide comfort for the family of Dr. John David Laida with a meaningful gesture of sympathy.

Learn the benefits of ordering with us

Provide comfort for the family by sending flowers. 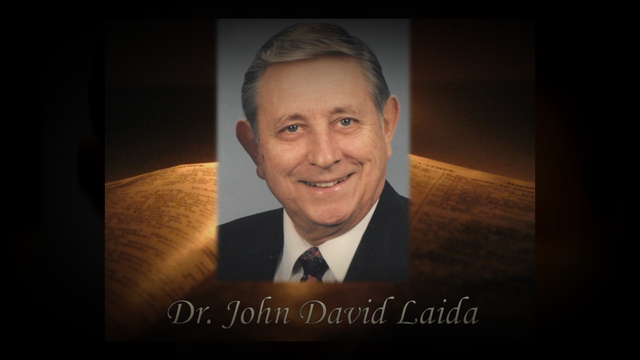 We encourage you to share any memorable photos or stories about Dr. John David. All tributes placed on and purchased through this memorial website will remain on in perpetuity for generations.

Connect with families at their time of loss.

By subscribing to email updates, you will receive two daily updates containing all new stories, photos, condolences, and more. You will also receive a one-time email, one week prior to the anniversary of death. The email will only serve as a reminder should you choose to connect with the family at what will no doubt be a difficult time.

Please select your relationship to the deceased and add your email address before submitting.

The following fields are required.

You have successfully been subscribed to email updates.

You should begin receiving updates within 12 hours. There will be instructions in the e-mail should you wish to unsubscribe, change your e-mail address, or otherwise configure your experience.

We loved and admired Bro Laida. He baptized me in 1987 and officiated our wedding in 2000. We will be praying for your family and he will be missed. Clay and Jennifer Lewis
Comment | Share Posted Apr 19, 2019 at 02:57pm via Condolence
RK

We are so sorry to hear of Dr. Laida's death. We are out of town and sadly cannot attend the funeral. He was our wonderful pastor and friend for many years. We are praying for Lib and the family. Reber and Opal Kennedy.
Comment | Share Posted Apr 18, 2019 at 09:59am via Condolence
JS

Dr Laida and Lib were so loved by members of FBCMadisonville during his interim there. None loved them more thuan we did and we share many Sunday lunches at our farm while he helped stir the food. What a delight they were. Our love and condolences go to all the family. So many beautiful memories.
Comment | Share Posted Apr 16, 2019 at 06:17pm via Condolence
HS

My deepest condolences for your families loss. Brother Liada led so many of us to the Lord ~ his life was such a blessing.
Comment | Share Posted Apr 14, 2019 at 09:03pm via Condolence

Why light a candle?

This is why you should light a candle..

Contact Us
Immediate Need
If you have immediate need of our services, we're available for you 24 hours a day.
Pre-Arrangement
A gift to your family, sparing them hard decisions at an emotional time.
Obituaries & Tributes
It is not always possible to pay respects in person, so we hope that this small token will help.
Order Flowers
Offer a gift of comfort and beauty to a family suffering from loss.
931-647-3371
1209 Madison Street
Clarksville TN 37040
Fax: 931-647-3313
navefuneralhomes@yahoo.com
931-289-4277
4639 West Main St
Erin TN 37061
Fax: 931-647-3313
navefuneralhomes@yahoo.com